Preparatory works for construction of the Block 7

After the completion of all formally legal conditions, JP Elektroprivreda BiH Sarajevo started the preparatory works for construction of Block 7 at TPP „Tuzla „ on November 1st, 2019. The preparation works amounted to 18,9 million KM and its duration is 12 months. 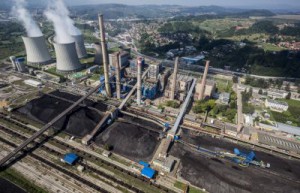 The Block 7, electricity capacity 450 MW and 270 MW heat energy is the greatest project in postwar period of  JP Elektroprivreda BiH d.d. - Sarajevo and one of the largest investion in Bosnia and Herzegovina.

The Block 7 will be constructed by chineese Consortium China Gezhouba Group Company Limited Peking (leader Consortium ) and Gedi - Guandong Electric Power Design Institute (member of Consortium). The works was contracted  to on principe „ tyrn key „  The  planned period for the construction work is  56 months.

With planned annual production of  2.756 GWh and  390,9 GWh heat energy,  the replacement Block 7 would be more efficient and with better performance than the existing one at TPP „Tuzla“.  Its construction will contribute to generation of electricity, as well as  production of heat energy, for places Tuzla and  Lukavac and  contribute to  be developed system of toplification for place Živinice.

The advantages for construction of Block 7 are as:the existing block will be replaced,  be less coal consumption with the same energy production, restructuring of  the coal mines,  continuity and work in coogeneration by which will be provided better and  longer energy supplying for the neighbouring places as well as increasing of the  energy efficiency and reduced  emmisions of pollute air particles.

By all technical and technological parameters Block 7 would be in compliance with requirements of European and national directives .   It  is designed as facility that meets requirements of modern ecologicaly acceptable electricity producer with the most modern technology.

During the construction will be applied BAT technic (Best Available Techniques), for combustion plants ensuring that emission of pullutants in air be below and fulfilled requirements of  BiH and EU legislatives.

The realization of the project Block 7 is  of importance for energy and coal mine security. The construction of this project provides  development opportunities for national economy,  as it is accompanied  by other projects that offer opportunities for more jobs, employment and better economy.

The realisation of this Project will have positive effects on infrastructure of development of the community and on living  standard in that local community,  for what JP Elektroprivreda BiH  has  invested 3,6 million KM by program of friendly surroundings.