In production, appropriate measures of shutting down obsolete inefficient thermal power units (4x32 MW TPP “Kakanj” 2x32 MW TPP “Tuzla”) in 2000, and the reconstruction/modernization of the remaining units (Units 5, 6 and 7 in the TPP “Kakanj”, units 4, 5 and 6 in TPP “Tuzla”, and units in HPP on Neretva) which were made in the last ten years 2002-2012, improved the energy efficiency by about 30% compared to situation before the war, with significant effects on the reduction of CO2, NOx, SO2 and particulate matter. For example, the CO2 emissions for the same production facilities and approximately the same level of production, reduced from around 9.5 million t/y in 1991 to around 6.5 million t/y today.

Index of the share of energy from renewable sources (Renewable Index) for EP BIH (data from 2010).

Specific heat consumption for existing units of TPP “Tuzla” and TPP “Kakanj” is approximately at the level of unit consumption for similar production units of the older generation from the 70-ies of the last century worldwide, with average specific heat consumption from 11.500 to 12.000 kJ/kWh, and i.e. efficiency of 30 to 31.5%. This level of energy efficiency of existing thermal units, along with the measures of planned maintenance and investments, will remain until their decommissioning, with proportionate increase in energy efficiency with the planned entry of new more efficient thermal power units in the company's production portfolio.

Although EP BiH has achieved significant progress in raising energy efficiency in recent years, it still lags behind in performance compared to developed countries, primarily due to the obsolescence of the existing production facilities and associated technologies. In this sense JP EPBIH has a challenge of the introduction of efficient and clean technologies, in the form of power plants using renewable energy sources & thermal units with clean coal technologies, in order to further improve energy efficiency and reduce emissions. According to one of the expected scenarios of EEB, with the planned entry into operation of new replacement units in 2018-2030, it is expected to continue with the improvement of the energy efficiency of the production from thermal facilities from the current 30.5% to 34.9% in 2020, and 40% by 2030. According to this scenario, the specific CO2 emissions from thermal power facilities of JP EPBiH would be reduced from the current 1176 kg/MWh to a level below 900 kg/MWh by 2030.

Given that the average loss in transmission and distribution on a global scale is approximately 9%, and as such is significantly smaller than the losses that occur in the genearation and consumption of electricity, the expected effects on the overall energy efficiency that can be achieved through measures in the distribution of electricity are smaller in comparison to what can be achieved in the other two segments. Yet there is room for improvement and thus significant efforts are being undertaken in distribution activities of JP EPBiH aimed at continuous reduction of distribution losses as an indicator of energy efficiency. There are two general areas to which these efforts are directed. The first area is called. “Supply Side” i.e. distribution grid itself, where a wide range of measures is applied aimed at the distribution of electricity from the point of takeover from the transmission network to the point of delivery to end users, in order to perform it with lowest possible losses.

Some of the typical measures for improvement of energy efficiency in the supply carried out in the distribution activities of JP EPBiH are:

Besides these, there is a large number of different measures of organizational nature aimed at reducing the so-called commercial losses that occur as a result of unauthorized and unregistered electricity consumption, that are being taken.

The second area in which the activity of distribution JP EPBIH directs its activities to improve energy efficiency is “Demand Side" Improving energy efficiency on the demand side is achieved through a variety of programs and measures aimed to influence the amount or timing of electricity use by end users in order to reduce energy consumption and peak demand in the distribution system. One such measure is the power limit prescribed in the “General Conditions for the Supply of Electricity”, and which is applied to customers whose peak power is less than or equal to 23 kW. Given that these measures are relatively recent, their actual effects on energy efficiency have not been evaluated so far, but it is generally expected that balancing of peak load in the distribution system affects the efficient utilization of existing distribution capacities and delays necessity to build new capacities.

An important technical precondition for more intensive application of measures to improve energy efficiency on the demand side is the installation of adequate equipment to measure power at end users. These measuring devices known as smart meters provide customers with more relevant information on the amount and the way in which they use electricity on the basis of which they can change their usual patterns of consumption and make positive impacts both for their own and the energy efficiency at the level of entire community. The use of smart electricity meters in the distribution began in 2010 and currently approximately 40,000 customers have such meters.

In parallel with the installation of these meters we are working on their introduction into the system of remote reading and management (AMR/AMM system). Building of AMR/AMM systems, which currently includes about 22,000 smart meters, will enable further development of various programs and measures for improvement of energy efficiency in power consumption. Full implementation of this system, which will require significant financial and organizational resources, is one of the priorities for the distribution activity in the period ahead.

Given the fact that, according to the present analysis, in Bosnia and Herzegovina electricity is used quite irrationally, and, among other things, this is caused by the relatively low cost of electricity, JP EPBiH in its electricity supply business launched a series of activities that will be focused on the promotion of rational use of electricity and electricity savings on the demand side.

Estimates are that there is great potential for reduction of energy consumption. The above activities will be based on educating customers and raising their awareness on the need for a more rational use of electricity. The focus of attention will be on the household customers of electricity, whose share in total electricity consumption is about 50%.

In part Customer Advice, you can find tips on how to rationally use energy and ways of consumption that can reduce the amount of electricity bills.

Some of the energy efficiency measures that JP EPBiH has implemented far can be summarized as follows:

As a socially responsible company and with goal of protecting consumers’ standard, and environmental protection, in December 2008 JP EPBiH started with the campaign of giving light bulbs to its customers. The intention was that each household, along with educational materials, was to receive energy efficient light bulb. A total of 618,000 20 watt light bulbs were procured, which effectively replace 100 watts incandescent light bulbs, provide the same light, and spend up to six times less electricity. All procured light bulbs were given to end users of electricity.

In January 2012 the campaign of giving light bulbs continued. On that occasion we procured a total of 150,000 bulbs, and the intention was to give energy efficient light bulbs only to the most vulnerable population. Two energy saving bulbs were given pensioners with the lowest pensions, and to beneficiaries of permanent social assistance. In the period January 9th – February 17th 2012, of the total of 150,000 light bulbs 88,672 light bulbs were given in all five branches for distribution. Energy saving light bulbs will allow socially vulnerable customers to be more rational with consumption and to save energy, and allow them to achieve monthly electricity consumption that does not exceed 268 kWh, which is a prerequisite for subsidies. Campaign of giving light bulbs to most vulnerable population continued until the end of 2012.

In accordance with the FBiH Government decision on the implementation of measures to reduce the cost of electricity to households and stimulate energy efficiency, and the decision of the Supervisory Board of the JP EPBiH on the application of this Decision, JP Elektroprivreda BiH used the data obtained from the competent authorities (Federal Bureau for Pension Insurance and competent services/social work centers in the Federation of Bosnia and Herzegovina) and starting with August 1st 2011 it now calculates and reports amounts of subsidies for customers, who have exercised this right, on their electricity bills.

Form of reducing electricity costs through subventions for consumption below average (below 268 kWh per month for customers of JP EPBiH) is used to provide subsidies in accordance with this decision for household customers, who use pension up to the guaranteed amount, as well as users of guaranteed pension, which is paid by the Federal Pension Insurance in the current month in FBiH, with the exception of users of proportionate pensions from the RS up to this amount, and electricity customers who are entitled to permanent cash allowances, which have received decisions of the competent services - social work centers in FBiH.

The current tariff rates which have been in force since June 1st 2011 abolished the seasonal differentiation of prices for all customers and there have been changes in daily differentiating of prices for all customers, except for customers from the household category. Changes in tariff rates were developed on the proposal of JP EPBIH and approved by the Regulatory Agency for Electricity in FBiH. Request for a change of time differentiation of prices was a result of analysis conducted in JP EPBiH, all with the aim to “iron out” system load curve, which would bring the need for new capacities to possible minimum.

Energy Efficiency Policy of the company has been defined, and the structure with clear responsibilities and authorities in the management of energy efficiency has been established, with four levels of authority: 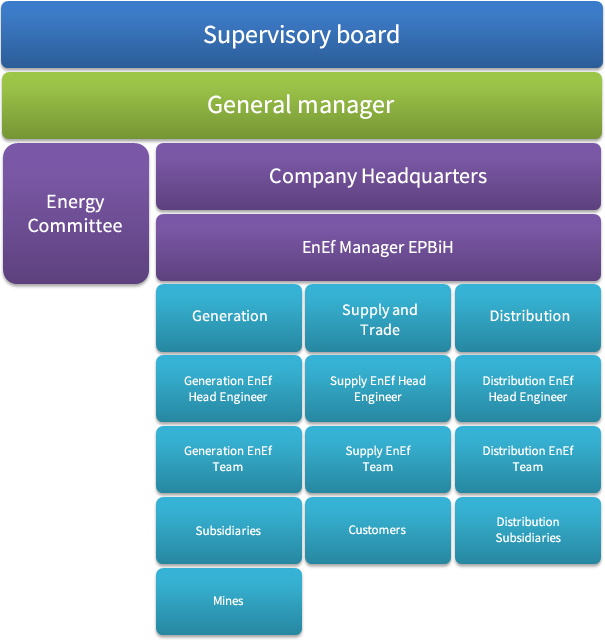 Scheme of the management structure of energy efficiency in JP EPBiH

Establishing a structure for the systematic management of energy efficiency in JP EPBIH has already proved useful in all business processes. Also, with this the Company is ready to welcome the FBiH Law on Energy Efficiency, which requires appropriate obligations for energy suppliers and distributors regarding the promotion and provision of services in energy efficiency on the demand side.