JP Elektroprivreda BiH generated the profit of 7.1 million KM in the fiscal year 2012, said Dr. Elvedin Grabovica, the General Director of JP EPBiH, during the presentation of business results of the company, held on 21 February 2013 in TPP „Tuzla“. 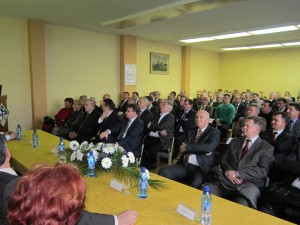 The generated total revenue of the company in the last year amounts to 926 million KM. 6.509 GWh of electricity was generated during 2012. 75 million KM was invested in the coal mines, which are within the EPBiH Concern, during 2012 in the capital increase process, and additional 65 million KM in the procurement phase. During 2012, the quantity of 6.23 million tons of coal was procured.

An investment of 390 million KM has been planned for 2013, as well as the commencement of building three electric power facilities – HPP „Vranduk“ and „Ustikolina“ and MHPP on Neretvica. The activities of modernisation and restructuring of JP EPBiH and the mines continue.